Remember the little Arya Stark who fought her way through “Game of Thrones”? Maisie Williams was her. Today, at the age of 23, the Bristol-born star has seduced Hollywood – she recently starred in the blockbuster “The New Mutant” – but also the jewelry house Cartier, which has engaged her as an ambassador. For Numéro art, the actress, director, producer and muse agreed to incarnate the great masterpieces of painting, from Munch’s “The Scream” to Caravaggio’s “Bacchus”. 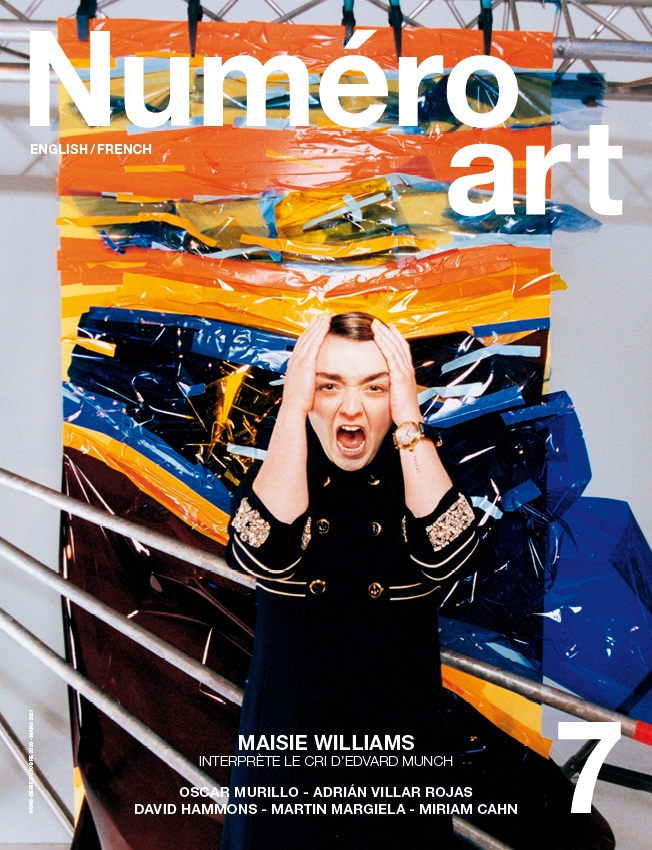 For an entire decade, her skill in wielding the sword electrified audiences the world over. She was the flamboyant Arya Stark in Game of Thrones, a child traumatized by adult vio- lence who, over the seasons, became a household heroine. Maisie Williams, who is now 23, did not enjoy a normal adolescence, but was plunged into a high-octane Hollywood existence. Last year she was back on the screen, both in the series Two Weeks to Live and the blockbuster The New Mutants. But she also took on the more glamorous role of ambassador to the house of Cartier for its new Pasha watch. Now a producer as well as an actress, highly committed to feminist and environmental causes, Williams is at last getting a taste of a more normal daily life for someone her age. When Numéro art interviewed her, in Paris where she was staying this summer, we found an actress in the full bloom of her youth, brimming with assured ideas and new ambitions.

Numéro art: You’ve been living in Paris for a few months. Why did you choose the the French capital?
Maisie Williams: I really like being here. I feel very inspired, much more than in London. Also, I’m working with my boyfriend [fashion-world entrepreneur Reuben Selby] on his brand’s first collection. We worked on it during lockdown and would like to do a fashion show at the Ritz. And since everything goes through Zoom, I’m much better off here.

Everyone knows you as an actress, especially in Game of Thrones, but your spectrum is much broader.
I’ve always considered myself a creative person. My true expression crosses several mediums. Limiting yourself to just one form of creativity doesn’t make sense to me. Music influences my acting, my personality is nourished by my relationship with fashion. The range of things that interest me is constantly expanding. Producing has taken a certain place in my life recently, and I’m planning on showcasing young artists. I’m also developing a series that I hope to fund before the end of the year. I’m writing it, producing it and intend to direct it. But it’s a long process! I’ve also been painting for two or three years. But I’m not forgetting my work as an actress – I’m going to start shooting a film about the true story of a ceramicist from the 1920s, which has helped me get into pottery.

You’re originally from Bristol, so you could have been in the series Skins, which was shot there and marked the 2000s with its trashy representation of teens.
I was eight when Skins started. I discovered it as a vintage series seven years later. [Laughs.] So I couldn’t have been cast. My debut in the audiovisual industry was very different from what you imagine when you think of actresses and actors from England. It’s very difficult to become an actress when you’re from a working-class family. You’re put in a “realistic” box and kept in reserve. Personally, I’ve never felt reduced to just one part of myself. I feel like I can walk into lots of companies and interest a wide variety of people. I have the ability to adapt to the people I meet, including professionally. I’m able to be charming, even if I don’t have social standing. In my opinion, this is the key to success. You have to know how to wear several hats.

Let’s talk about Game of Thrones, which ended in 2019. The role of Arya Stark brought you worldwide stardom, but most of all, you spent all your adolescence and more playing this tenacious character. Does the series seem like a time capsule to you today?

Yes it does. I see that part of my life as a very special mo- ment that will be frozen in time forever. From now on I’ll only be able to see it from the outside – I’ll never again know and understand my life as it was then. But it’s pretty healthy to think of it that way. What happened to me is incredibly bizarre, perhaps one of the most bizarre experiences a young person can have. I learned a lot about myself, I got out, that door is now closed. It’s a very powerful feeling.


When the show ended, I had a strange feeling, as though I’d been pretending to be an adult for ten years when in fact I wasn’t. A few months ago, I downloaded TikTok, which is a very detailed gateway into my generation’s brain. What young people think and feel runs through this app in one way or another. I understood everything I’d missed as a teenager. While I was in lockdown, I connected with my younger “me,” the reckless 15-year-old – a recklessness I didn’t have back then. It was lovely. Now when I’m in contact with people my age, I see myself as less of a stranger. I’m more natural. This wasn’t the case in the world of movies and series, where I pretended to be an adult. I’ve been doing it for so long… It took me away from something. I was happy to finally take off my mask, so to speak.

Your generation seems more inclusive and more involved in the future of the planet than those that came before. Why would you say that is?
Our generation is more lucid, for sure. I feel respect and awe for the planet we live on. The future matters to us. It’s hard to say why, but we no longer accept certain behaviours. Why haven’t others before us taken up the challenge of kindness and inclusion? I can’t say. What’s certain is that, in the past ten years, the development of technology has been a milestone. Political struggles have been another. A new world is emerging, and many people are desperately clinging to the old one. There are so many unknowns. I feel it very strongly: we’re at a turning point. It’s like humanity was inside a pressure cooker. I think historians looking back at our era 200 years from now will consider it a time of major importance. In this context, extraordinary works can be born and art will hold a central place.

I don’t plan much in my life. My goal is to make others happy, to help them discover new perspectives. As an actress, a lot of the things I do are difficult and intense. I’d like my contribution to the world to be more and more positive, and the least sad possible. I want to direct in order to accomplish my vision. I’ve been fascinated by this profession since I started as an actress.

Your character in Game of Thrones has often been associated with the word “badass,” meaning someone mighty and indestructible, a warrior. Do you claim it?

I’ll tell you the truth: to me, that word doesn’t mean much. Frankly, it’s kind of a crappy expression, right? I think people feel the need to put labels on women when they aren’t “feminine.” At any rate it’s one way of getting them to fit into a box. I know it’s supposed to be flattering and kind to say “badass,” but I think all women have extremely diverse layers within them. It’s true that I take on roles like Arya Stark, which are supposedly typically masculine. But you shouldn’t focus just on that. Women can be fragile, and that’s great too. “Badass” is used too often. We deserve better!