With the hit series behind her, the 23-year-old British actress is ready to forge her own path, both with a new crop of films and as a brand ambassador for Cartier’s Pasha collection. 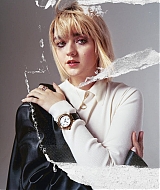 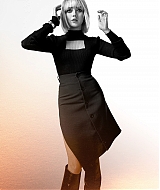 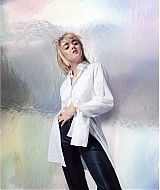 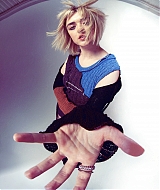 Last fall Maisie Williams turned heads during Paris Fashion Week, wearing matching outfits (and makeup) with her boyfriend, Reuben Selby, while sitting front row at Thom Browne. This year, the actor spent her summer in Paris, building partnerships with brands such as Cartier, Jacquemus, Courrèges, and awaiting her next chapter. “As an actress, the best advice I received was to put my personality aside in order to find one that matches each role,” she says. “In fashion, it’s different—you have to understand exactly who you are to be able to represent the brand and the look.”

It’s nearly impossible to forget Arya Stark’s personality. The ruthless warrior Williams played from ages 13 to 21 (eight seasons) on Game of Thrones was beloved among a cast of distinct, oversized personalities. Arya began as a mischievous young girl and grew into an avenging assassin—a tomboy surviving in a male-dominated world. And it can’t be easy to experiment with one’s masculine side while also becoming a young woman; nor to build one’s own character when playing someone else. With short hair and flattened breasts, Arya had to grow up very fast and learn how to protect herself. Williams too. Both Arya and Williams have silenced their critics in different ways: the pretenders to the throne for Arya, and the internet trolls that have disparaged Williams’ looks. Both subverted feminine stereotypes. We’ll never forget Arya discussing her period between battles, reminding Jon Snow that women continually see more blood than men. Now Williams is free to take back her own body and become herself.

For all that blood and violence, Williams is still not finished, and joins the Marvel Cinematic Universe in her role as Rahne in the latest X-Men movie, The New Mutants. Sitting amid the horror and superhero genres, The New Mutants is a real lockdown movie, perfect for a generation traumatized by the global pandemic. “The young mutants are in lockdown in a medical center, apparently to protect themselves and understand their powers, since they don’t know their nature or how big they can get,” she says. “My character is discovering her sexuality, falling in love with another girl, and they are protecting each other instead of fighting. It offers a new perspective to the Marvel movies. It’s somewhere in between The Breakfast Club and Stephen King.”

Coincidentally, confinement seemed to be a theme, with two other related projects from Williams this year. In the TV series Two Weeks to Live, she stars as Kim, a young woman who has been raised in violent doomsday-prepper isolation for years. She rejoins society to avenge the death of her father, and quickly finds herself mixed up in a prank gone horribly wrong. Williams also stars in The Owners, a horror film based on a graphic novel, in which a group of young lawless kids try to break into an old Victorian mansion owned by an elderly couple. “It’s set in the ’90s, so I created a style for it, full of denim and with bleached hair. Like everyone else I’m obsessed with ’90s style,” says Williams.

The actress has also recently invested her time and resources into her own production company. “I created Pint-Sized Pictures with two girlfriends to showcase unknown women’s talents,” she says. “We’re working on music videos, short and long films, and sometimes shows. As for the name, it’s because I’m short, the height of a pint!”

From supporting creative talents and mentoring young women to establishing her own style in acting and fashion, Williams is very much a product of her generation. Add to that animal activism, too. After the many years spent in Westeros, she’s determined to make up for lost time.