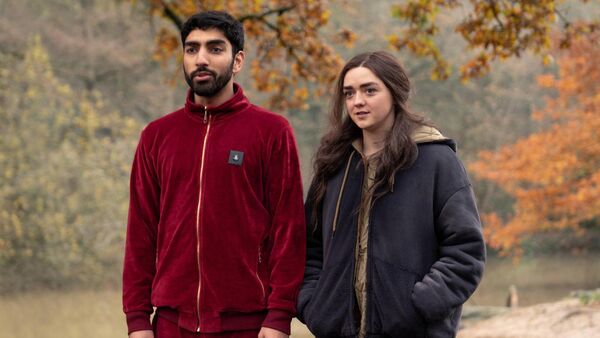 At the centre of the new Sky One series Two Weeks To Live is a young misfit called Kim.

Taking on the role is Bristolian Maisie Williams, 23, who is famous the world over for playing Arya Stark in HBO series Game of Thrones, which she starred in from 2011 to 2019.

Asked whether there was a time when she herself has ever felt like a misfit, Williams doesn’t hesitate to bring up being a child star.

“You know, I was famous when I was 12 years old, and that makes you feel really weird!” she says, laughing.

Comedy drama Two Weeks To Live is very different to Game of Thrones – and, indeed, anything else on our screens right now.

We learn Kim was just a little girl when her father died in murky circumstances, and has since lived a remote rural life with her survivalist mother, Tina (Sian Clifford).

Now all grown up, she takes on a secret mission to honour her father’s memory – but has no idea the danger and chaos that awaits (clue: it involves Kim, Tina, and new pals Nicky (Mawaan Rizwan) and Jay (Taheen Modak), on the run from murderous gangsters and the police).

Luckily, though, Kim has some incredible skills up her sleeve.

Here, we find out more from stellar cast members Williams, Rizwan and Modak.

Williams first read the script for Two Weeks To Live – written by Gaby Hull, who was behind ITV’s Cheat – a few years ago when it was a film, not a TV show.

“I thought the context of the world coming to an end and the fear of that was really intriguing; it triggers people’s fight or flight and to see how people react is interesting, especially with Kim,” notes the star.

“Now the world around us has changed, it’s become something which is very topical. We just couldn’t have predicted that way back then.” Modak, who’s a relative newcomer (but you might recognise him from ITV drama The Bay), jumped at the chance to have a job – but especially when he saw the cast involved.

“I would have been an idiot to turn down such an opportunity,” he quips.

“And then, they’re just such short, fun, jam-packed episodes. They’re packed with so much emotion and comedy and action, obviously – from Maisie’s side and Sian’s side specifically. And there was just a lot of fun, but then it’s grounded in relationships, between the four of them.

“For me, it was the combination of quite relatable characters in quite extraordinary situations,” adds Rizwaan on the appeal of the script.

Just seeing how these characters react in extreme situations, and the comedy that comes from that, I really enjoyed reading.
ACTION PACKED

This is a stunt-filled series, and Williams recalls a day on set when one scene went a bit wrong.

“We filmed it at night-time, and so we were quite tired – and when you’re tired is when mistakes come.

“There’s this part where I kick Sean Pertwee [who plays a villain] in the chest, and I caught him just in the chin and the lip and made him bleed. I felt really bad about that!” Rizwan, a writer and comedian who started out making YouTube sketches jokes: “Nicky just screams a lot, bless him.

“There was a shootout car sequence… Maisie, I genuinely thought you were going to fall out the boot because you were literally hanging out the car!

“I don’t know how you were doing it. I was genuinely terrified. So, no acting on my part for that scene.”

“Tina is very cutting, and Jay and Nicky are kind of these bumbling idiots that she gets to put down all the time.” She continues: “It’s such a good breakout role for Taheen. He absolutely smashed it; his delivery makes me laugh so much. There’s not a single element of these performances that I don’t enjoy on-screen.” Modak confides he found the comedy “very challenging, especially in a dark comedy like this where you’re trying not to tell jokes”.

A lot of the stuff he says is pretty absurd and people watching will know that, but you’ve got to play it straight and honest.
GROWING UP

“We just wanted to do a little nod [to Arya],” says Williams. “That’s the role I’m known for and her most defining feature is how she can fight so we wanted to add a little Easter Egg.”

Kim and Arya are both kick-ass characters for Williams to have on her CV, but what’s different is that “Kim is allowed to be a young woman and take her time to find her place in modern-day society and that’s something that Arya wouldn’t be able to comprehend”.

“It does feel like an evolution for myself,” the star adds.

“All of the wonderful things about Arya felt very familiar when playing Kim but it’s nice to play someone who’s more my age, more feminine and gets some romance.”

“She’s watched a couple of movies and understands love stories even though the only films that she has seen are like Braveheart, which is quite a sad existence!” she elaborates.

“She doesn’t have any of the shy, awkward, embarrassment that we often get when we engage with someone we are attracted to. I’ve always felt very forward in trying to say exactly what I mean, so it was really nice to play a character who does that.”

Two Weeks To Live launches on Sky One on Wednesday, September 2

Maisie appeared on the Tonight Show starring Jimmy Fallon, I have screencapped her Interview to our gallery, enjoy! Maisie Williams gives her two cents on the ending of ‘Game of Thrones’
Aug 20, 2020
admin
Game Of Thrones / Press / Season 8

To put it mildly, season eight of ‘Game of Thrones’ was disappointing. But it did provide us with two great TV moments from Maisie Williams, however. One from her character on the fantasy series, and one of herself appearing on Jimmy Fallon’s talk show.
Maisie Williams appeared on ‘The Tonight Show starring Jimmy Fallon’ last night via video link, where she discussed her 10-year long relationship with the TV series that started her career.

Williams’ character Arya Stark was one of the highlights of the series, and the eighth season in particular (Night King stabby stabby). The character received probably the least annoying ending of all the characters, to which Williams says: “I’m so happy with my ending, and it was just a beautiful end to a decade of my life. And I couldn’t be happier with it.”

The pair reminisced on their April Fool’s joke from 2019, in which Maisie pretended to reveal a spoiler for the final season of ‘Game of Thrones’. In Maisie Williams’ first appearance on ‘The Tonight Show’, she convinced the audience and everyone watching from home that she had let slip that her character from the show, Arya, dies in the second episode. Now that would have made for an interesting season, going forward. Maisie has been featured in the Madeon Miracle Video directed by her Game Of Thrones co-star Lena Headey, I have added screencaptures to our gallery.